Don't be the fool looking the master's finger

More and more I hear people promoting either the Spotify model or the Google one. In a nutshell, they are saying: "if we copy them, we will be successfull" (regardless of their own culture or context). Also, some people think that you can change your own culture by simply adopting web giant practices. Remember Culture? It's that tiny thing that eats new strategies (and practices) at breakfast every morning ;-) Peter Ducker if you hear us...) This reasoning makes me think about a Chines proverb:


"When the wise man points at the moon, the fool looks at the finger" 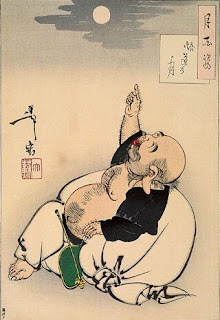 Let me try to explain why. Spotify first:

I won't detail that case too much and let you read Ben Linders' InfoQ post instead: Don't Copy the Spotify Model

My main point is that people should be inspired by the same driver and objective as Spotify (i.e. Aligned Autonomy) instead of copying and focusing on one strict organizational answer found by the Spotify guys during their Lean journey.

Here is the moon (i.e. the Aligned Autonomy objective): 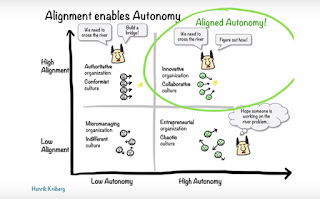 And here is the finger our entire industry is focusing on instead ;-( 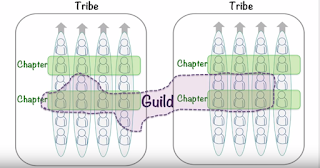 What bothers me more in that whole Spotify consultancy feast is the lack of result from an end-user perspective (on that topic, see my previous post: (controversy) Is Spotify a model to follow actually?)

Google is probably the case that annoys me the most. And I won't talk here about their problematic business model and its impact on our privacy (The client is the one who pay. If it's free, then it's because you are the product...Sad Panda)

No, I will just talk here about the huge bias most of us have when we talk about that successfull company. For many people, every post, practice, interview technique, tool,... coming from Google is took as gospel truth (regardless of everyone's context in term of funding, activity, culture, contraints, etc).

A little bit like with Spotify, most of us are looking at the master's finger, saying: "if we want to succeed, let's follow their advices and work like google does!" (last example here: Why do some developers at strong companies like Google consider Agile development to be nonsense?).

Before you follow that dangerous path, let me tell you a few things about Goggle. Or let me sum up it with a picture: 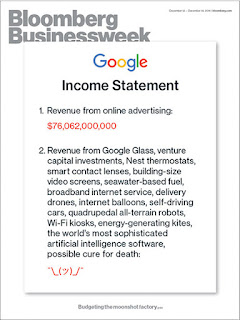 For more details, see the article: Google Makes So Much Money, It Never Had to Worry About Financial Discipline—Until Now.

Yes, Google has a tremendous a cash-cow (i.e. advertising) and is desperately trying to find its next cash-cow massively investing on whatever-is-cool-with-top-notch-engineers.

Then, unless you are rich like Donald Trump, don't try to mimic Google or to blindly follow their advices: almost all their projects are loosing money and work because they are founded by their advertisement cash-cow. If you don't want to be like the fools looking at the master's finger, don't listen people saying that you should work exactly as google does.

At best, you can be inspired by their striving for excellence (which is very impressive, mos def).

What they are currently building and lobbying with all our data and the destruction of our privacy (with concrete consequences on our lifes), will probably deserve another post...