Answers and thoughts about the Windows 8 Metro style Applications

I just come back from 2 days of MS tech days in Paris, and I would like to publish what I've heard & understood related to the Windows 8 / WinRT topic.

In fact, nothing is really new since the latest "build" conference in California, since it seems that the MS guys in France are STRICTLY TIGHT to respect the drastical and confidential planning imposed by Steven Sinofsky (head of Windows team).

Anyway, here is a recap of the previous episodes, and some answers to questions related.

WPF was proposing developers to reinvent the UI application experience with the power of declarative programming (the advent of XAML), rich composition, customization and GPU boost. At the end of the day, it’s a fact that very few developers have leveraged this option. Indeed, most of us continued to build old-fashion-style-full-of-data-grids applications requested by our users (or what we thought) with this technology that wasn’t fit for that (don’t even get me started with WPF DataGrids performances ;-)

With the new Windows 8 to come, developers may be able to develop two different types of applications: Metro style Apps, and Desktop Apps.
Whereas WPF came with recommendations only, the new “Metro” style application for Windows 8 aims now to regulate developers more strictly. The idea here is to force them to fall into the pit of success (Windows team version ;-)  Without other choices (in the case you want to leverage on the new windows runtime WinRT, instead of continuing to build classical Desktop Apps).

Looking at the Metro Apps demos, I had the feeling that the pit of success won't be easy to reach, even with more control achieved by the development ecosystem (whether at build or run time). Indeed, a lame interpretation of the metro style may be an application with tons of pages to slide (it'll worth to have a touch device in that case ;-).

I definitively think that the adoption of the Metro style guidelines and constraints won't save us to rely on real ergonomy specialists & BAs in order to provide relevant tailored experiences for our users (message for IT managers ;-).

Is every Metro style Applications forced to be released on the MS market place? Even my enterprise private applications?
Yes ;-( as it is done with the Apple Store. It may change, but there is today only one public store to release Metro style applications.

It took me time to learn the WPF way (XAML, M-V-VM pattern, etc). Is all my knowledge lost?
Nope. If you look at the Windows 8 Platform and Tools diagram below, you can see that XAML is still the declarative language for UI (whether you develop your code behind in C++, C# or VB.NET). WinRT aims to provide a better and more performant XAML based engine for our UIs. 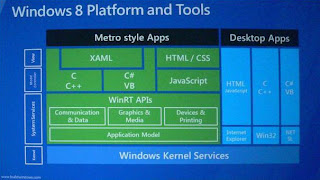 I heard that HTML5 was the first-citizen language for building Metro style applications. Is it correct?
Nope. It is a fact that HTML5 (with JavaScript as Code behind language) makes the buzz and is currently mostly implemented today. But MS claims during those tech days 2012 that WinRT will be fair and provide the same capabilities to the 3 existing citizens: XAML-C++, XAML-C# and HTML5-Javascript. In fact, all WinRT APIs are natives and according to the MS guys, WinRT is like a “modern COM”.

Is .NET dead?
Nope. .NET will be still supported by Windows 8 for Desktop Apps or Server Apps. And if you decided to build Metro style applications, you will still be able to develop them in C# (instead of HTML5 or C++). In fact, you’d rather use C# as language for your Metro style applications if you want to ease the “every code-behind that take more than 15 milliseconds should be executed asynchronously” recommendation via the amazing async-await C# language extension (not available in C++).
For the record, the .NET framework is partially loaded when running a Metro style application developed in C#. I said partially, since some APIs are filtered/prohibited within a Metro style context. Whether at build or run time (e.g. no MessageBox is allowed for instance; the compilers will raise errors if you try, whether in C# or C++).