A japanese guy found a way to control a vacuum cleaner with a wiimote. It's fun to see what can be done with this awesome device. Click here to see the video.

This post is dedicated to windows forms UI deadlock situations.

I) The classical deadlock situation (the one that freeze the UI)

This happens when the synchronization with the UI thread is made in a synchronous manner (Control.Invoke(...), SynchronizationContext.Send(...) etc.). 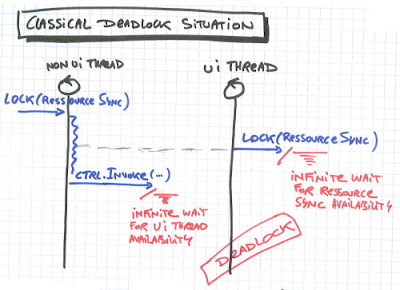 Solution: To fix this kind of deadlock, you may use asynchronous API to delegate tasks execution to the UI thread.

Those asynchronous API may be :

This kind of deadlock is slightly more difficult to diagnostic. It happens when a "non UI" thread is making a call to the Invoke method of a Control that belongs to a closed Windows Form (this may happen just after a close to the Form).

In that case, the execution blocks indefinitely on the call to Control.Invoke() and the delegate supply to it never begins (see here). => this prevent the lock from being released by the blocked thread ! 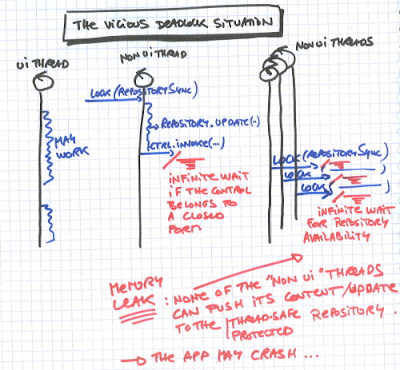 Solution: Prevent from situations where "zombie controls" are accessed (beware to unsubscribe all the .NET events to prevent from maintaining object alive) and use one of the asynchronous API to delegate tasks execution to the UI thread.
Publié par Thomas PIERRAIN à 7:59 pm 2 comments: