Last Tuesday evening, I was invited by Thomson Reuters to attend one of their special events dedicated to innovation in finance.

The location was quite prestigious (i.e. the "Maison Blanche" in Paris) and both the organization and the speakers were truly excellent. 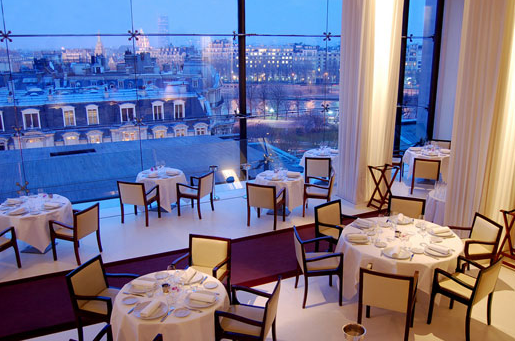 To be honest, I was expecting much more marketing and sales speech from Thomson Reuters than what we had actually. But Mind you, I am not complaining ;-)

The event started by a short but brilliant 20 mn talk from Navi Radjou. He's Innovation & Leadership strategist, but also co-author of the "Jugaad Innovation" book (A frugal and flexible approach to innovation to the 21st century).

After this panel and a conclusion by Rémy Granville (Thomson Reuters), we all networked around a buffet... in front of the illuminated Eiffel Tower.

Yes the panel was very interesting, but I'd like to focus here on Navi's intervention.


The topic was "how to reinvent financial services in the 21st century".  And its core topic was really about innovation.

Navi first tackled some of the CEO common beliefs/myths: "Our group is Invicible/Irremovable, our group is Universal, and" ... another belief  which I can't remember here, sorry ;-(

For instance: Marriott & Accor are really big companies in the hostelery/inn business. But Airbnb jumped out of the blue in 2008. They are now able to provide more rooms to end-users than Accor and Marriott can. They can even do it in some emerging locations, were the ol' groups aren't able to create Inns or to take market shares.

Music, Taxis, ... in fact, the concept of impermanence seems to generalize in every business domain.

Wealth management is another digital disruption victim for instance.


Because everything is possible now with crowd-founding. It's a new deal. For everyone (e.g. the recent 41 M$ raise for the RSI video game... 41 Millions $ !).


By the way, do you know that Nigeria emerges 3rd most profitable stock market in the World?!?

Navi tackled the "Universal" belief of CEO (i.e. our activity or business model is universal). His main point was that there are lots of innovations and disruptive models emerging from all around the world. Africa, Asia, South America, ...

Let's take M-PESA for instance. This phone money transfer solution has dramatically transformed the lives of all Kenyans (no need to take the risk to walk with money in their pockets anymore). It has also revolutionized the way Kenya does business. Without banks.

According to Navi, there are lots of things to learn from what currently happens in those emerging countries & markets.


So. How to adapt, change and innovate to succeed and survive in that moving world?


Agility is a must for all modern companies. Indeed. When everything is changing all the time. Companies have to get ready to embrace those changes. Quickly enough.


Google-Apple-Facebook-Amazon. If you don't change and embrace new technologies & ways to make business, those giants will do it for you.

And there is a pattern here. Google is emblematic, but all those successful companies have built their own ecosystem to speed up & ease any of their new moves now. For financial services (and any other industries), there is probably something to learn from.

Transcend the Business/IT silo to innovate


According to Navi, the solution to innovate and be successful nowadays is to transcend the Business/IT silo. At last, I would say.

Open & connect with the others


Another key to success for companies is to open themselves to the others:


Navi also warned us about a bias that most of the company have nowadays: they create dedicated teams for innovation, dedicated awards, dedicated labs... Openness is the real path to follow. You have a lab? why not. But don't let dedicated people play alone to the game of innovation. Let's open it to everyone, including external partners.

Navi then introduced us the 4 roles of innovation: the Inventor, the Transformer, the Sponsor, the Connector.

IT guys should be the Connectors for innovation. Not the inventors!


Instead of desperately trying to be Inventors, successful IT divisions are now much more Connectors.

IT guys must inform their business of what's going on with technologies.

You don't need to invent to innnovate! Knowledge is NOT power. Finding and sharing knowledge IS power.

And technology watch is not sufficient. We should also watch new usages  for inspiration. This is exactly what BBVA is doing with its Cross-Country Emerging Markets Unit.

Navi left us with few takeaways:


Talking about simplification, you definitely have to see this!


Yes, I'd like to conclude this post with something that my mate Cyrille had shown me. It's a short, but exceptional TED talk from Yves MORIEUX:

> As work gets more complex, 6 rules to simplify <.

I strongly advise any people working in a big organization to take 12 minutes to see it. You won't regret it. A truly engaging & inspiring contribution.